Mount Everest, the highest point on earth is still considered the ultimate mountaineering adventure. It has been said that to stand at the pinnacle of the earth is one of life's most rewarding experiences, yet not everyone has the climbing experience, money, time or, indeed, the courage to summit this magnificent mountain. However, witnessing Everest, or Sagarmatha as she is known in Nepal, needn’t just be a distant dream, as Dream Heaven Adventure offers the opportunity for you to fly via helicopter over Mount Everest and the surrounding Himalayas to eventually land at Everest Base Camp where you will be wowed by the all encompassing majestic mountains and explore the surrounding area at an altitude of 5,380m. It’s not hard to see why this Everest base camp helicopter tour with Landing in KalaPathar is one of Nepal’s (and our) most popular tour packages.

This major bucket list EBC helicopter tour from Kathmandu Airport allows you to visit the mighty Mount Everest at 8,848m in just one-day, perfect for those strapped for time. Other mountains to be seen on this tour are the fourth highest mountain in the world, Mount Lhotse, the fifth highest in the world, Mount Makalu and also the sixth highest in the world Mount Cho-Oyu. The tour starts first thing in the morning to ensure the clearest mountain vistas before the clouds roll in, any seasoned mountaineer will know that the weather in the mountains can change in a heartbeat, yet the mornings are always the calmest at altitude. After the guided mountain tour, you will then land at Mount Everest Base Camp within the Kala Patthar zone.

So what are you to expect when signing up for the Mount Everest Base Camp Helicopter Tour? Well, first up it’s the ultimate in scenic Helicopter flights, unbeatable in fact! You’ll fly from Kathmandu International Airport to Mount Everest Base Camp (EBC) whilst soaking up plentiful panoramic views of several snow capped Himalayan peaks on the way, including Mount Everest herself. Once at EBC there will be an opportunity to visit the real heroes of the mountains, the local Sherpa communities with their impressive Buddhist culture and colorful custom.

The Everest base camp helicopter tour will stop in Kala Patthar for close views of Everest where you can take time for photos & videos on the roof of the world. During this helicopter tour, you’ll get to witness other sightseeing spots such as; Tengboche Monastery, Gorak Shep, Everest Base Camp, Kala Patthar itself, and the infamous Khumbu Glacier. If travelling via helicopter during spring time, there will be a chance to take in aerial views of stunning scenery other than mountains such as the lush green alpine rhododendron forests and pine trees. Fly high above rivers and valleys and over green rolling hills dotted with many farm villages and terraces.

The Mount Everest Base Camp KalaPathar Helicopter Tour will then continue above famous Namche Bazaar and Lukla town before heading back to Kathmandu International Airport for the drive back to your hotel. After a breath taking few hours spent around Everest Base Camp, your perspective will be changed eternally! All in all, taking the Everest Helicopter Mountain flight is a no brainer if you are interested in experiencing once in a lifetime exceptional views from the comfort of a helicopter with birds eye views of Mount Everest, its adjoining giant peaks and the culture that encompasses the Himalayas.

This tour is so much dependent on the weather and climate condition of the Everest region. During unpredictable weather and climatic condition the tour is impassible. Thus, Helicopter tour is not possible all year around. The ideal time for EBC Heli tour is the month of spring and autumn along with winter so the time from September to May is the ideal time to go an EBC helicopter flight tour.
Similarly, the months of autumn (September to November) and spring (March to may) the weather is predictable and quite favorable. Thus at this time of year you can have the Everest Base Camp Helicopter tour.

Highlights of the Everest Base Camp Helicopter Tour

Overall, Everest Base Camp Helicopter Tour is an adventure trip packed with all stunning views of mountains, hill and valley surrounded by mountains.  A shore scenic flight to base of Mt. Everest may prove to be once a lifetime experience for you.

This Everest Base Camp Helicopter tour can be completed in short duration of time (4hrs) perfectly fitting these and a tight schedule. Likewise, someone having strong desires to experience the beauty of mountains but is physically not able or has some health issues can also undertake this trip and unlock their dreams.  As a whole can this trip, even children’s and elderly people without any difficulties.

Helicopter tour comes with the stunning aerial views of the world’s highest mountains including Mt. Everest. It is considered as the ideal way to witness soaring mountains, glaciers. This trip ensures you with life long memories and experience without any physical efforts, this too in very reasonable cost.

Furthermore after landing you will get enough time to capture photos on the cap of the mountains. Also you will enjoy you breakfast at luxurious Hotel called Everest View. Believe me enjoying your breakfast with the stunning views of soaring Everest will be the most unforgettable experience of your entire life. 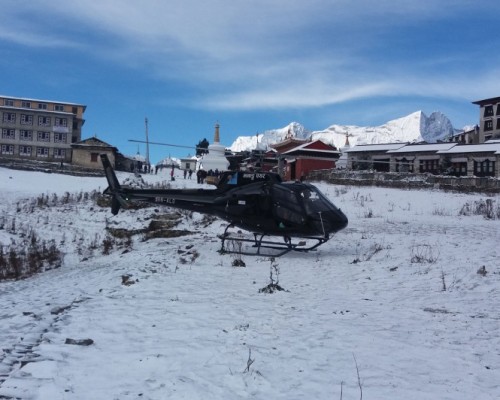 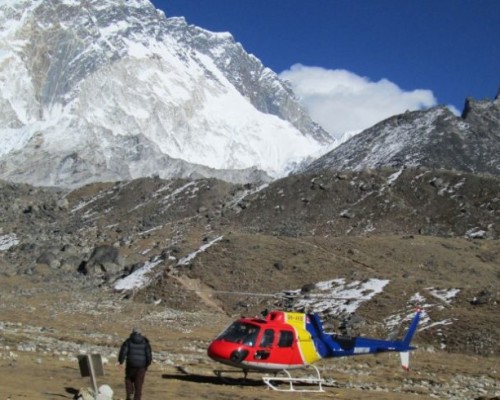 + Expand all- Collapse all
Note

Please consider, the time of itinerary is assumed. Time may vary according to weather conditions and air traffic at Kathmandu and Lukla airport.

Low flights
The helicopter flies at low altitude as compared to other Everest mountain flight thus flight provides a closer view of the peaks.

Multiple views
The helicopter flies over the magnificent Himalaya which offers you the wonderful landscapes, view of great waterfall, old Buddhist monasteries and Chortens. Moreover, you will get a chance to interact with Sherpas at Lukla during the fueling time.

Fly privately
If you have own group of 4-5 people you will not find any outside in the flight. Thus it will be more like a private trip to so you can relax and enjoy the beautiful views take photographs.

Why booking your EBC Helicopter tour with us?

But remember if you are touring in winter you need to have base layers and down Jackets as temperature of Kalapatthar goes below minus degrees.

The group of 5 people with weight of around 500 KG all together cost you 3500 USD per person, but if you are less number in such case you may have to pay some extra charges and condition may be applied. But don't worry, we try our best to provide you this tour at the cost that you can afford.