Are you an adventure lover? And planning a trip to Everest, Nepal in budget? Well, this Budget Everest Base Camp trek is designed for those adventure lovers who want to explore EBC in short period with small budget.

Everest Base camp considered most popular trekking trail in the world, is applicable for all travelers, a person who can walk around 6-7 hours every day in rocky trail can accomplish this trip easily. Also, no special training and previous hiking experience require to-do this beautiful budge EBC trek.

Budget Everest Base Camp Trek trip is full exciting adventure, which will give you a marvelous lifetime experience. It’s also blend of the natural and cultural wonder of the Himalaya.
Our Budget Everest Base Camp Trek starts with short scenic flight from Kathmandu to Lukla (2880m), then we start our walking to Phakding, stay overnight in Phakding. From Phakding we continue our trekking Namche, most beautiful Sherpa capital. Then we continue the trip until EBC via Tengboche, Locuche, Gorakshep Kalapathar and bet back the same way.

Take a breakfast in Kathmandu hotel, and then transfer to the airport for your flight to Lukla, its just 35 minutes flight. After short scenic flight we reach at lukla airport, where guide introduces you with you porter then continue adventure journey to Everest Base Camp. Our journey for today is only 3 hours; we walk through local villages, beautiful forest and Dudhkoshi bank to get Phakding.
Overnight in Phakding

After breakfast, we start our trek by following Dudhkoshi river, take a lunch in Jorsalle, then we continue our walking until we get Namche, on the way we can see beautiful forest and mountain vistas. Namche is one of the most beautiful/popular Sherpa capital, from where you can explore gorgeous Himalayan sceneries.
Overnight in Namche Bazaar

Totay is rest day in Namche Bazaar for acclimatization. Visit around namche bazaar or hike up to Khumjung village, Everest view hotel is most beautiful place of Mountain View, where we can enjoy the view of Mount Everest, Ama Dablam, Nuptse, Lhose etc. Namche bazaar is famous for its colorful market. Total we also visit the monasteries and Tenzing Hillary School.
Overnight in Namche Bazaar

We start our enjoyable walk through the forest and Dudhkoshi Koshi River with magnificent views of Khumbu region, we arrive in Phunki Thanga at around 1 hour. Then we further walk by following the rhododendron forest, villages to achieve Tengboche, which is our today’s destination. Tengboche monastery is one of the most beautiful Buddhist monastery, and also largest monastery in Khumbu.
Overnight in Tengboche

After breakfast, explore around Monastery, and enjoy the spectacular views. From here we continue our day walk through Dudh Koshi River Bridge and cross Imja River to reach Pangboche. Then the trail passes through several chortens and large Mani stone walls. Then we further walk in the mixed forest of birches conifers and rhododendron. Today (on the way) we can explore the views of Mount Tawache, Mount Ama Dablam and Mount Nuptse. Overnight in Dingboche.

Today’s Acclimatization in Dingboche will help you to acclimate at high altitude. Take a rest in Dingbche or hike up to Nagerjun is today’s programme. Nagerjun offers amazing views of Mount Makalu (8463m), Thamserku and Mount Lhotse. Overnight in Dingboche

After breakfast, we start our walking with downwards to get Pheriche village. Then we step hike up to arrive at yak farm. From where you can enjoy with the fascinating views of Tawache Peak (6,542m) and Cholatse peak (6,440m) etc. Getting to Lobuche a small settlement at the foot of Lobuche peak is significant. Overnight in Lobuche

Today’s destination is our main goal. After breakfast, we start our trek through the rocky moraine undulating trail. After 2-3 hours walking we reach at Gorak Shep. This is a big and a bit challenging day walk along the Khumbu Glacier. From Lobuche we continue to Everest Base Camp. The view of Khumbu icefall, Khumbu glacier, Mt. Pumori, and Khumbutse are unforgettable lifetime experience. Spend sometimes in Base Camp for snap and enjoy with the sights then get back to the GorakShep. Overnight in Gorakshep.

Wake up early morning, and hike up to Kala Pathar ( 5545m) one of the most beautiful view point. From where we can enjoy the 360 degree panoramic views of Mount Everest and Mt. Lingtren, Mt. Khumbetse, Mt. Pumori, Mt. Nuptse, Mt. Ama Dablam, Mt. Lhotse, and many other beautiful peaks. Spend some time in Kala Pathar then back to Gorakshep, take a breakfast and continue walking to Pheriche. Overnight in Pheriche

After breakfast, we continue walking to Pangboche village, where you can see beautiful monastery, oldest monastery in the Khumbu region. From Pangboche we steeply down to the Phunki village by following Dudh Koshi River. Then we further cross the river and step up to Namche Bazaar. Overnight at in Namche

Today is final day of your trek, its easy walking with few uphill climbs and then trail drops sharply down to Lukla by following the Dudh Kosi River. In the evening enjoy the final dinner in the mountain. Overnight in Lukla

In the morning, take a 35 minutes scenic flight to get back Kathmandu. Arrive in Kathmandu airport and transferred to the hotel. In the evening join the farewell dinner. Overnight at Hotel in Kathmandu.

Weather of Everest Base Camp

Thus, in total you will gain an elevation of 4000m. As a result, there will be variation in the weather of various places during the trek.
As you ascend higher, the weather turns out to be more unpredictable in this trek. Therefore, it is best to prepare well before the actual trek. Everest offers four different seasons- summer, spring, autumn, and winter.

In Everest summer falls in the months of June, July, and August. During these months, the minimum temperature at the highest point of this trek is around 0 degree Celsius. This is very delightful temperature considering the fact that you will be at the highest base camp of the world.

Howbeit, it is considered as the offseason for trekking due to the fact that monsoon coincides with it in Nepal. Anyway, if you plan your trek taking monsoon into account with appropriate trekking gear, summer trek in Everest could be a memorable experience.

In Everest the months of December, January, and February comprises the winter season. At this time of the year, Everest experiences minimum amount of rainfall. As a result of which, most stunning pictures of mountains are captured in this season. However, due to the heavy snowfall some trekking routes does not function in this season.

Furthermore, some places along the trek have extreme temperature of -20 degrees in winter. Thus, winter treks in Everest is least popular among trekkers. Nevertheless, for the people who like to trek in solitude, this season is ideal.

In Everest region, autumn falls in the months of September, October, and November. Autumn has moderate temperature and a slim chance of rainfall, as a result of which trekking in this season is extremely popular. This means you will have a pleasant trekking experience during this time of year. The day time temperature is mild and that of night time is also not that extreme.

Spring season in Everest base camp falls in the months of March, April, and May. During this time of year the natural vegetation of the region gets exceptionally verdant, especially of Sagarmatha national park. The walk through the pristine forest of rhododendron and pine is an amazing experience. Also, the temperature offered at this season is perfect for trekking.

Furthermore, the mountains, glaciers, and archaic villages are at their excellence during spring. Thus, photography becomes wonderful in the great environment of spring season.

Altitude of Everest Base Camp Trek

The altitude of the locations you will be trekking during your trek is mostly more than 3000m, however it also depends upon various side trekking option accessible during trek in the Everest region. Thus, you can assume that different trekking packages come along with different destinations and their altitudes.

Here is the list of major destinations that falls under different trekking packages of Everest base camp trek along with their elevation. 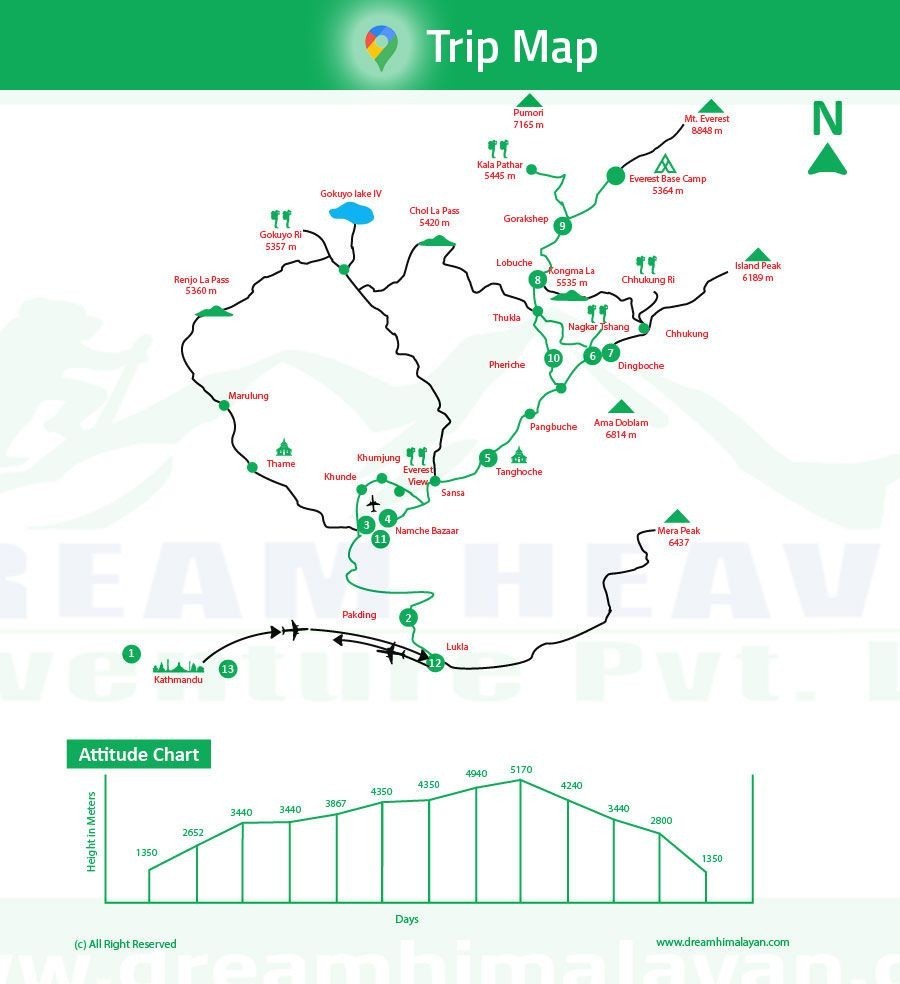