Mustang (1,372m to 8,167m) is a cold desert valley situated in the northern part of Nepal within the most popular Annapurna circuit/ Annapurna Conservation Area. Ethnically, the people living in Mustang belong to Tibetan origin and mostly share Tibetan culture and customs. Upper Mustang is still a restricted zone and needs a permit to venture into. Tourism, animal husbandry, and trade business are the main economic activities in this region. Upper Mustang in recent days has obtained worldwide reorganization and popularity, and it has become a destination to explore once in a lifetime. Moreover, the Mustang valley consists of Lower Mustang and Upper Mustang, and they are both Buddhist and Hindu pilgrimage sites. The people during the trial try to internalize the lifestyle and culture of the local people. Besides trekking, it is also famous for cycling, horse riding, motorbike riding, and sports. Upper Mustang consists of three rural municipalities: Lo Mangthang, Dolme, and

Before Nepal’s unification, Mustang was one of many other independent kingdoms. Mustang shares a close tie with Tibetan culture, lifestyle, and civilization, so it is often nicknamed "hidden Tibet" or "mini Tibet." The major attractions of Upper Mustang are the high-altitude desert, Kaligandaki river, the brown and red soil, Muktinath Temple, the ancient Lo Manthang kingdom, sky caves, Ghar Gumba, Tiji and Yartung festivals, horse riding, farming land, and villages like Ghiling, Dhakmar, Syanbochen and others.

The Walled City of Lo-Manthang

Lo-Manthang is the ancient capital city of the Mustang district (Mustang Kingdom). The city of Lo-Manthang rural municipality is surrounded by walls, so it is often called the walled city of Mustang. The city annually receives thousands of tourists from around the globe. Even after the unification of Nepal, there was a king in Mustang whom people truly revered. admired. But now there is no king and only the four-storied palace remains, being fenced in by the thick walls around it. Furthermore, you can visit centuries-old Gumbas ( Choede Gomba, Monchoe Dragkar Thegchen Gompa) and monasteries in this beautiful city.

Even after the abolition of the monarchy in Nepal, the king of Mustang was highly revered and admired by the local people. With a four-storied palace that is fenced by the walls in order to protect it from enemies. You can also visit the 15th –century

Ghiling is just an hour's walk from Sangbochen village, situated at the height of 3570m above a red structure settlement. This village covers a large area, including a sacred monastery (Thrangu Tashi Choling Monastery), where Tibetan Buddhism and other local rituals can be observed. This is one of the hidden valleys in the Upper Mustang.

Ghara village is located at an elevation of 3770 meters above sea level and is about an hour's walk from Yara village. The popularity of Ghara village is mainly because of the mighty holistic (Luri Gompa) that lies on the cliff, half an hour's walk from Ghara on foot. The main inhabitants of this place are from the Nyingmapa sect, who mainly practice Tibetan Buddhism. From Ghara when you climb a hill on the west of the village you will witness the views of the west valley, Chhonhup, the west valley can be observed as you climb up the west hill from Ghara. Another important thing you will notice here is blue sheep, which are rare in other places.

The Upper Mustang trek will lead you to the Nepalese land bordering Tibet (an autonomous region of China), where you will find most of the people following Tibetan Buddhism as their major religion. On the way, you will encounter a number of big and small size gumbas, Buddhist museums and monasteries. including (Choede Museum), Thugchen Gompa, Luri Gompa, and Thrangu Tashi Choling Monastery), which are the most precious Buddhist cultural heritage. Furthermore, you will see Buddhist prayer flags swirling on the rooftops of the houses, on the walls, chortens, and gumbas, and all these reflect Tibetan Buddhism. The Tiji Festival celebrated in Lo-Manthang is one of the main examples of Tibetan Buddhism in the Upper Mustang. 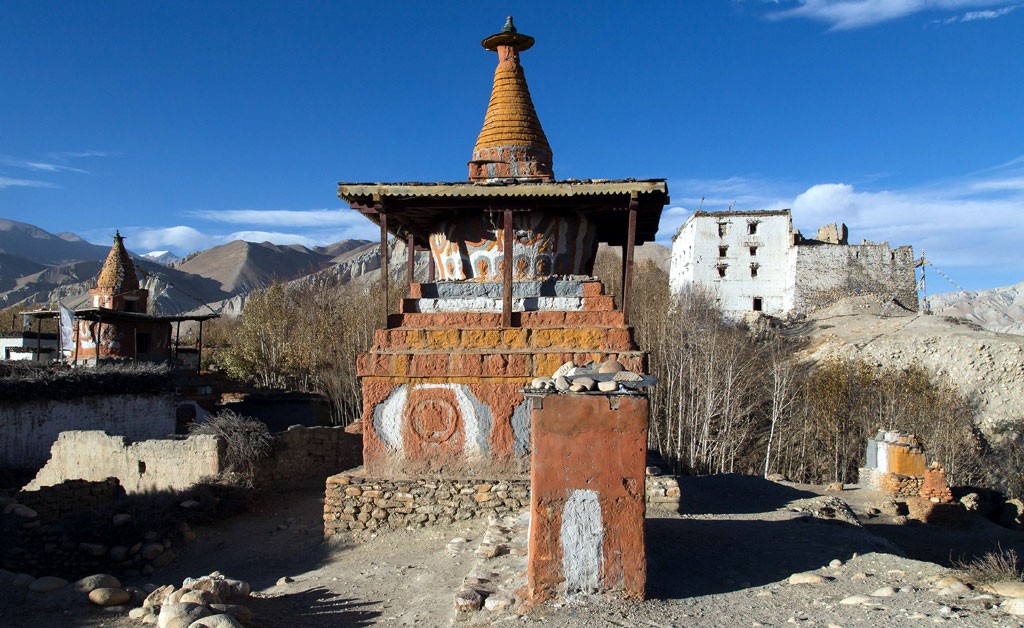 While on the way to Lo-Manthang via Kaligandaki River, you will observe10,000 of manmade caves on steep walls, popularly known as ‘Sky Caves’. They are major attractions to visitors, with some historical and cultural importance. Some research claims that the caves were made to mummify the dead corpses and some claims that they were built in order to safeguard the family members from the invaders. The sky caves were supposed to be built during the 12th to 14th centuries and have valuable art and artifacts like Buddhist paintings, sculptures, manuscripts, and even dead bodies.

The lifestyle, culture, and heritage found in the upper Mustang make the land unique and rich. Though it is remote from the major cities, the culture associated with them and the heritage that belongs to them make the land and people rich. The ancient mythology, ancient arts, and numerous ancient Buddhist monasteries, caves, and palaces are the important heritage of the Mustang people. The famous monasteries that you can visit during the trek are Thegchen Ling Gompa, Jampa Gompa, Thupchen Gompa, Choe Gompa, Garghu Dhejing Chhyoling Gompa, Namgyal Monastery, Luri Ghang Gompa , Jampa Lhakang Monastery, Samar Monastery, and others.

Among other gompas, Dragkar-Thegchen Ling Gompa is the most popular Buddhist monastery in the region. If you are interested, you can explore the artefacts that take you back to the 13th century. Further, 14th century built, Jampa Monastery displays more than 109 ancient mandala paintings in multiple colours. You can explore golden and silver statues and sculptures in this three-storied Jampa monastery. Moreover, Thupchen Gompa has a centuries-old history dating back to the 15th century. During this time, the Gompas and monasteries were the centres of all religious activities in the Upper Mustang.

"Mukti Kshetra", is the most sacred religious site for both Buddhists and Hindus around the world. The pilgrims who visit this site often believe that the sins and curses that fell upon their lives can be washed away after bathing in 108 holy taps and 2 ponds, “Saraswoti Kunda” and “Laxmi Kunda” in front of the temple premises. The temple is a part of the Upper Mustang trek route. At this sacred pilgrimage site, you can observe the “Eternal Flame." The elevation of the temple is 3800 meters, just below the Thorong-La Himalayan pass (5415m). Moreover, a big statue of Buddha, Guru Rinpoche (Padmashamvav), has been placed nearby the temple, and the Buddhists who come here often visit this sacred site. Buddhist and Hindu priests perform the prayers with mantras inside the temple of  Muktinath.

The Tiji Festival at Lo-Manthang

The Tiji Festival is a purification ceremony that takes place every year during the harvest season in Lo-Mangthang (the walled city). The Tijuana Festival also has a connection with Tibetan culture and shares a long history. The Tiji festival is mentioned in many ancient folktales, folklore, and myths. The Mustang tiji festival trek is basically celebrated in regards to the triumph over evil. Basically, this celebration goes for three days in the month of May each year. Traditional colourful dresses, masks, and sword dances and songs are some of the main attractions of this festival. Lamas normally play traditional music, drums, and chant mantras during the celebration.

The weather in Upper Mustang

The Upper Mustang zone experiences a trans-Himalayan climate, which is typically semi-arid and cool, and further, it receives very little rainfall (250 to 400 mm). In winter, when the climate is tough, most of the villagers shift to the lower altitude, and during the summer they climb up. The best time to hike (upper Mustang) around this semi-arid zone is the autumn season (October to November). Recently, cycling and motorcycle rides have become quite popular in the upper Mustang.

How can we reach Upper Mustang?

The best way to do the upper Mustang trek is to fly to Jomsom from Pokhara or to travel in private vehicles. The best thing about the Pokhara to Jomsom flight is the opportunity you get to watch the world’s deepest gorge formed by the Kali Gandaki River (a river popular for Saligram, a dark black fossil stone). From Jomsom, you have to trek following the Kali Gandaki river upstream till the village of Kagbeni, then to Chele, Syanbochen, Lo-Manthang, Ghiling, Chhucksang and back to Jomsom, Pokhara and finally to Kathmandu. Normally it is a 15-16 days hike and costs around $1800 plus USD.

The Upper Mustang trek is one of the most unique treks in Nepal and probably in the whole globe. Those travelers who wants to do a shorter trek by staying luxurious hotesl, Mustang luxury trek will be an ideal choice. It is most liked by the local Nepalese, South Asians, and travellers from different points of the globe. It offers you wonderful experiences of the cold desert valley with the taste of Tibetan culture and the view of the world’s tallest snow-capped mountains like Annapurna, Dhaulagiri, Machhephuchre, Manaslu, and others. Explore, experience, and enchant yourself on the high Himalayan trek of your life.